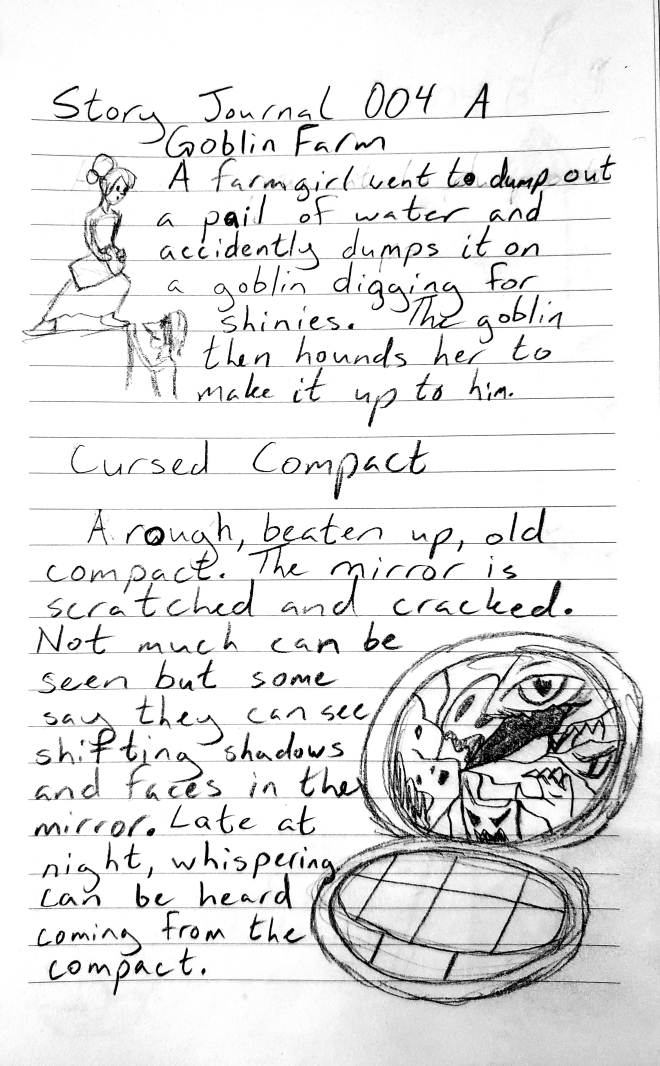 This was inspired from when I was dumping some water. I just threw it into the yard, and it was dark, so I didn’t notice that I was dumping water on a raccoon until it jumped up and screeched unhappily. As it ran off, I couldn’t help but think that I was on its list now. This led to the idea of a farm girl who went to dump a bucket of dirty water and dumped it on a goblin. The goblin then demands recompense for the insult in the form of servitude. This goblin then starts showing up all the time, dragging her on these ridiculous endeavors. The theme for this could be about reparations.

This was inspired by a beaten up compact that I found on a walk. The mirror was dirty and warped and it looked like there were other faces in the reflection. Perhaps the story could involve someone who finds the compact and is tormented by it. It could also be used in the Patch Town story. It could be used as a trap in the haunted house that sits on the border.

I saw the Nutcracker and the Four Realms and there is a scene where the nutcracker is found guarding a bridge. The set made me think of two guards that regulate who enters and leaves their kingdoms. They have been doing this job for a long time and they get their fun by messing with travelers. The Wood Guard plays the straight man and the Fungi Soldier speaks very quickly. The two didn’t get along at first because the two kingdoms are at a tedious peace. But over the years, they have grown a friendship. The theme can be common goals can breed comradery. They can be involved in a fantasy story where some great destruction is descending on the land and all the kingdoms now have to actually work together instead of just tolerating one another.

This is a device that can be used in the Crystalard story. Crystalards sometimes have homes on our side. So, they will put these in their homes to keep out unwanted guests. Bella has one is her home. The down side is these stones also keep out the owners. This is was inspired by a quartz formation I have. There is a separate piece of quartz that I bought from the same person and it seems to fit into the formation. This is where I came up with the key in a lock idea.

This is inspired by a stuffed animal I have. It has a zipper along the shell that lets you hide things in it. This made me think of a bug that enjoys making nests out of soft materials and sturdy stones. For some reason these bugs seem to like the texture of paper money and will steal coins to build the bases of their nests. These creatures are a favourite of thieves. They build a box for the bugs to make nests and when they bring the money back, they switch it out for different cloth.

This was inspired by a sting ray origami I made. The craft was light enough that it could glide on the air. I began to imagine a scene where origami crafts are floating down into a village. In this story, there is a small school for witches. One of these witches likes to sit at one of the outcroppings that overlooks the village and fold origami. They then enchant them and send them floating down. Sometimes they write little notes or put treats in them. The witches do not interact with the village often so most of the time they only interact with each other. One day, someone from the village decides to travel up the mountain to see who keeps sending the origami but only witches are allowed in the school. The theme would be about loneliness.

This week the stories started off with objects inspiring a scene and the stories blossoming from there. Overall, keeping these story journals has been helpful in examining my narratives. I already have journals where I keep story ideas, but I never really examined. I just wrote down the ideas and moved on. If I used the ideas, then they would be fleshed and if I didn’t, they sat in the journal until I did. The reflections though made me look at what themes I was using, and I started to notice patterns. This made me start to try and focus on varying the types of stories I was making.